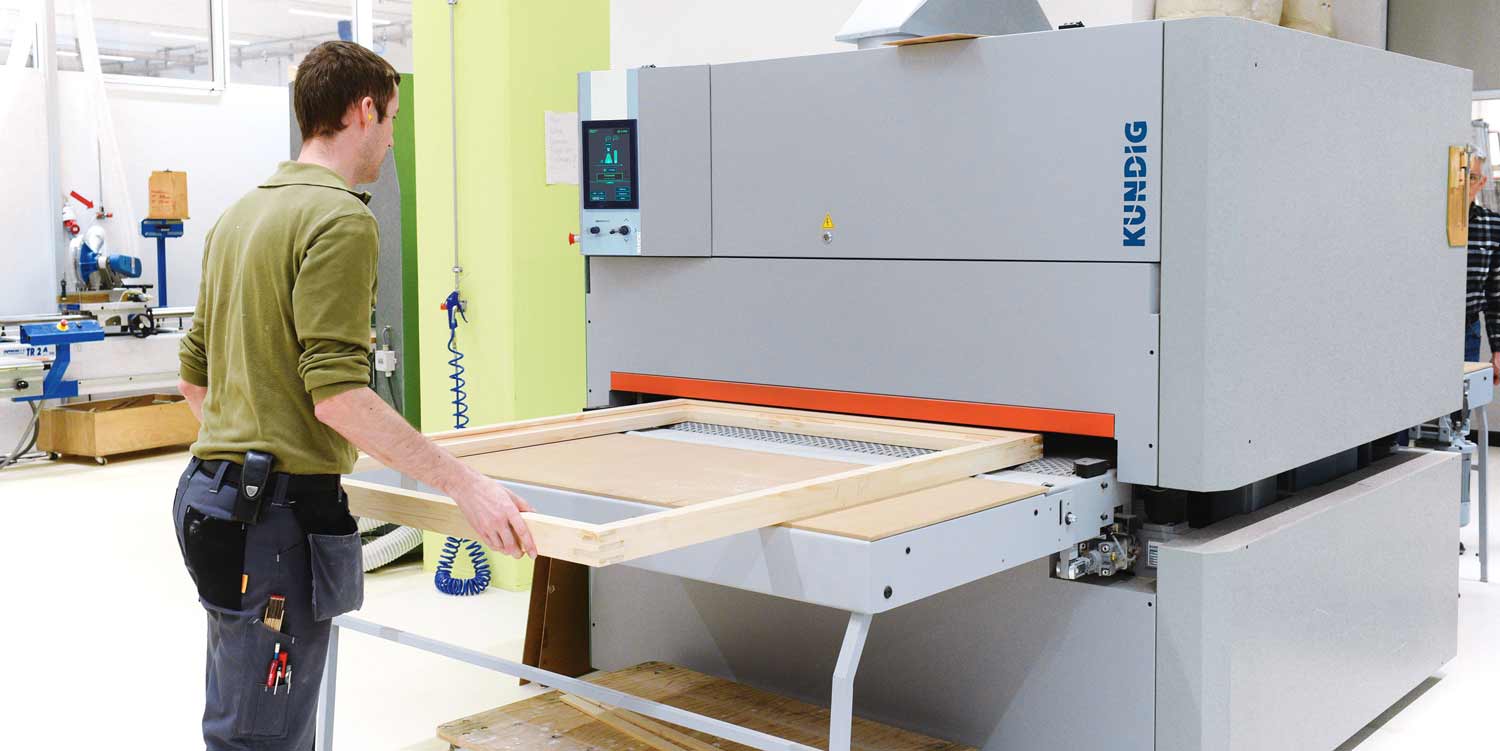 The benefits of a frame-by-frame window production are often confronted with higher machinery-investments compared to the processing of single parts. Probably this may be only half-truth, as a growing number of precision window-sanders from Switzerland proves …

Swiss window-company Trütsch utilize an opulent 3 000 m2 production-area at their plant at Ibach: “We hope to benefit long term by increased quality and a more efficent production”, explains Hans Trütsch. There is a lot of competition in the Swiss window-market he reports. It is caused by the restricted access to the European market, as Switzerland is not a member of the EU. So most manufacturers are limited to their home-market: “You must offer extremly good value for money to survive here.”

He confesses to being a mentor now: “My daughter and a manager run the company today, I’m retired”, he smiles. His daughter Cornelia Wiget and manager Edi Zwyer strongly disagree: “His long-standingexpert-knowledge is vital for the company. Barely nothing would exist here without him”, Zwyer says, pointing at the plant of this family-business founded in 1876. 28 employees process about 2500 wooden- and wood-alloy windows per year as well as window shutters and front doors. Apart from recent energy-saving windows they also manufacture for heritage-restorations. They can even produce leaded-windows themselves.

Surface is the key to customer

“You can’t tell by looking if a window is good or not – no matter how many CE-labels there are sticking on it”, Hans summarises the dilemma of every windowmaker. “But customers can recognize a good paint-job. So the coatings got more furniture-like over the past years. They are the key to customers.” According to him it makes no sense to fight prices with industry: “Getting better prices by improved quality strikes me to be economically more reasonable. So we invested primarily to our surface department.” Which means not only better sprayguns or high-tech milling-tools but also precision-sanders: “They improve coating quality most of all”, he says confidently. 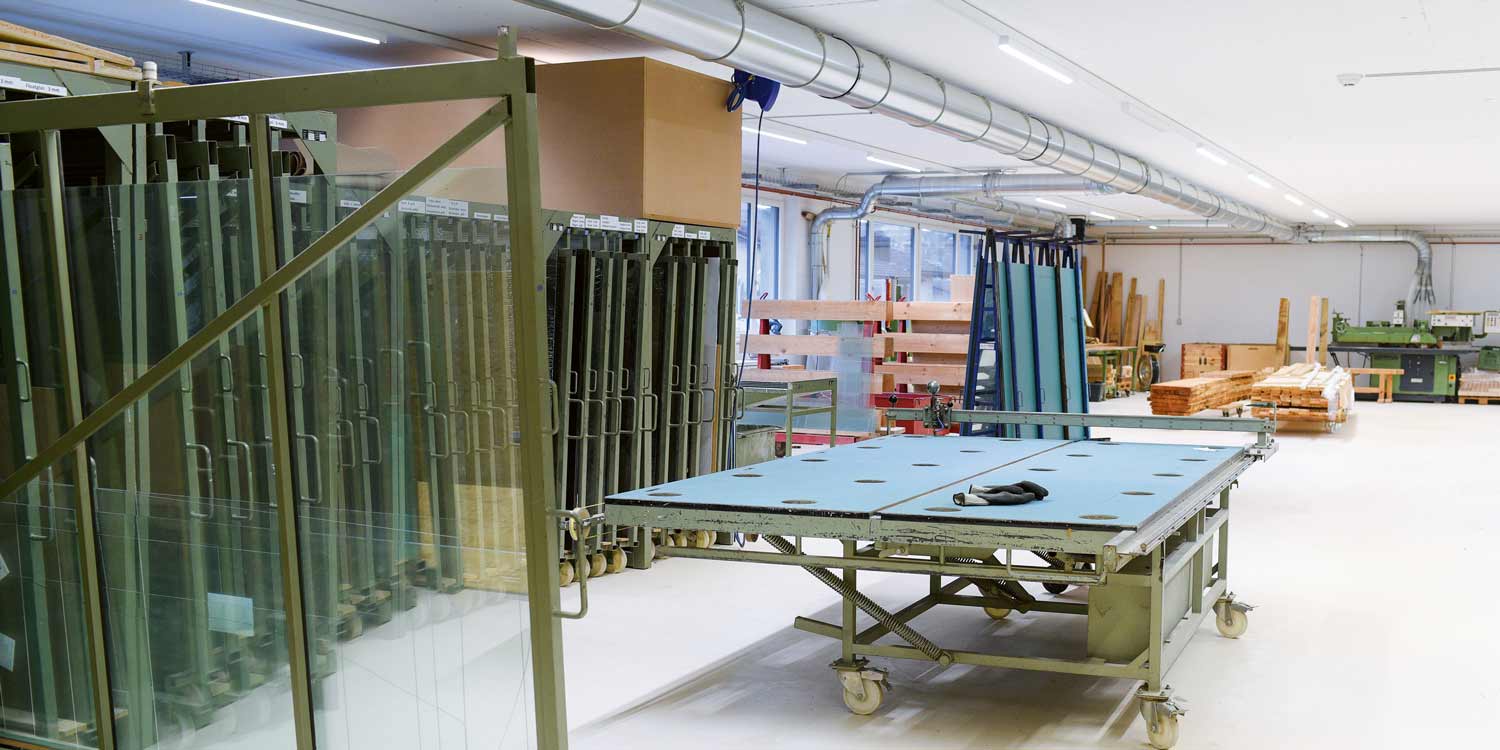 He trusts in proved processing methods: “There is a lot of discussion on processing and coating of single parts”, Hans reckons, “But speaking with a hard head one can get more performance by an angular profiling processor than with a CNC-centre and a frame-by-frame production is also a lot more secure.” Therefore the most important purchase was the wide-belt sander, he says: “Hence this promised the biggest leap in quality to us.” But with a frame-by frame production one can run easily into a bit of a problem: “Such a sander can’t be wide enough.”

Normally the sashes are fed obliquely to prevent ugly sanding-traces across the grain: “Then even extra-wide machines quickly become too narrow.” One of his friends, a cabinet maker, has owned a Kündig wide-belt sander for many years: “This Kündig is tried and trusted, so we decided to ask the Swiss market-leaders too.” He was pleasantly surprised at the very beginning when he found out “… that a working-width of 1 600 mm is a standard with Kündig. Usually wide-belt sanders of this size are custom-made and prized accordingly.”

“We realised that Kündig makes a popular dedicated sander for windowmakers, known as V max.“ The concept convinced him instantly: “This invention is really clever. Instead of feeding the sashes obliquely and losing working width, they turned the sanding-heads oblique in the Vmax.” The two sanding-units form a “V” with angles of 350° and 10°: “This acts almost like cross-sanding, where the traces should neutralize each other too. So you can feed up to 1 600 mm wide sashes straightforward without paying attention to long- or cross-grain. Actually this is time-saving since we must sand by hand now only a few extra-wide frames left.”

His painters are satisfied too, Hans points out: “Even spruce gets very smooth with marginally no traces left in cross-grain. They say that woodfibres now stand up less and as a result spraying is much easier. We need less lacquer-sanding now – as a matter of fact, now it’s sufficient to give it a once over by hand to remove dust-particles.” It’s no wonder that his verdict about the Kündig Brilliant-2 1600-RdPd-F is absolutley positive: “This dedicated sander turned out to be a real time-saver. The Kündig is reliable and sturdy and delivers on a constantly high level. The quality of our surfaces got visibly better and this is a major sales argument now.” Hans is convinced: “In my mind Kündig provides a nearly ideal sanding-system for frames with the V max. Due to oblique sanding there is almost no belt clogging so the sanding-belts last longer than usual even in coniferus timber. In our production the Kündig had a noticeable positive effect in a short time. Yes, we are happy.” 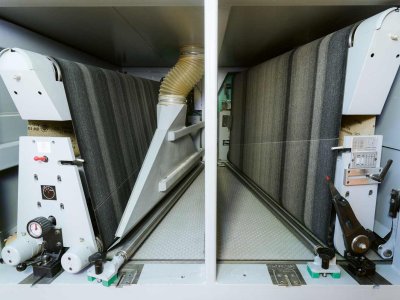 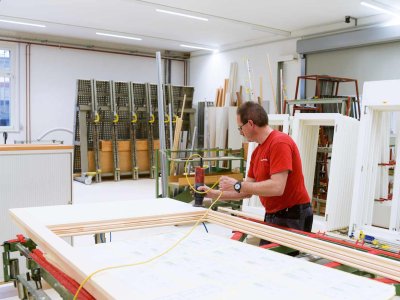 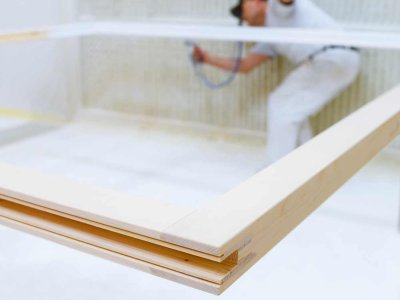 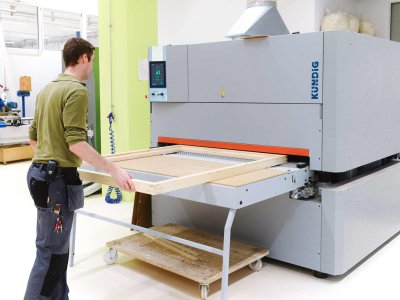